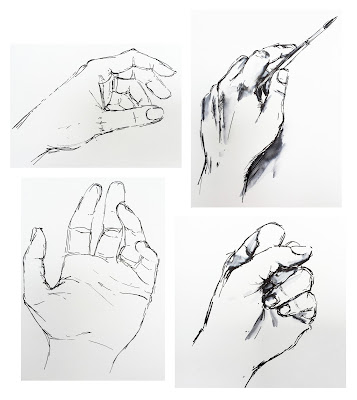 I decided to have a go at drawing my hand, which I’ve not tried before. I enjoyed it and will do more as it’s a great workout for drawing skills, no bluffing you have to draw what’s there or else it looks wrong.

I also had a go at doing a quick sketch of my husband Nick while he was digging – ready for a wild flower bed 🙂 Quite hard to draw when someone is constantly moving. But I decided on the pose and then waited until he did that movement again.

I used a new pen I’d not tried before called ‘Tombow Dual Brush Pen’ its great because it’s double ended with a thin nib one end and a brush like tool the other but the good thing is it’s water soluble so I went over two of the hand drawings with a paintbrush full of water and it moves the ink around and adds depth and tone.
Using a pen to draw with is not for the feint hearted as there’s no rubbing out and every mark counts! 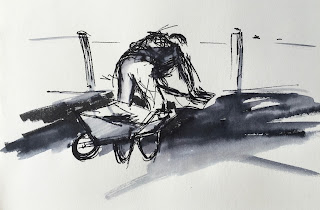