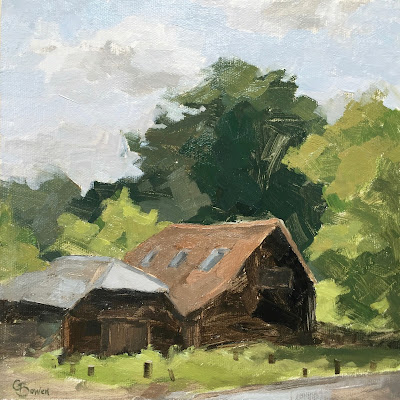 I felt inspired to go back to the area we had our summer workshop this week. Some of my students were drawing this view and I thought that’s what I’d paint if I was here. I really liked the dark barn and the light roofs silhouetted against the range of green foliage behind.

On the middle of Tilford Green I was getting stuck into this painting when the cricket people appeared, I didn’t know they played a match on a Saturdays! I had 50 minutes to get most of it blocked in. I worked like a demon it was a good exercise as there was no time for fussing. I was amazed at what I could do in such a short time. I had 90% completed and I finished it in my studio. I worked up until they were ready but then I couldn’t clear up quick enough and I had 2 crickets escort me with all my gear to the edge of the grounds, they were friendly though!
The photo below shows the end stage. The photos weren’t that helpful as the darks were just a mass of darks you couldn’t see any tonal detail unlike when you’re out there and looking.
I’m pleased with my painting and a change from London buildings! 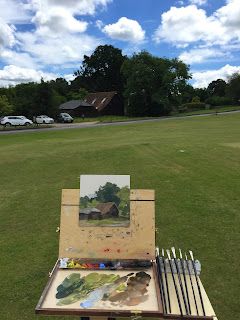