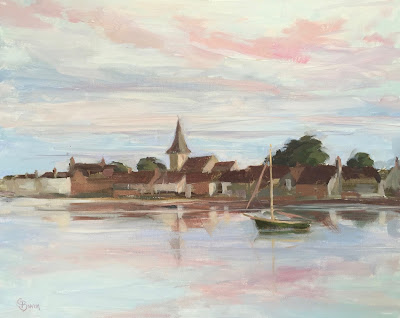 I had planned the night before that I wanted to be in Bosham for sunrise I left at 5am but arrived and it was still dark, I held off setting up as I couldn’t see the view!
I put my easel right next to the water as it was the best view. I thought the tide was at its highest.
As the sun rose it lit the clouds and they gave a magnficent show. You have to be so focussed and fast to capture such fleeting colours. I mapped out the building and treetop line and went for it. Beautiful pastel colours, really enjoyed painting it.
I knew I didn’t want to put massive detail in the buildings so I tried painting them in a sweep blocking the colours together and then defining the shapes later with lighter tones and brighter colours, it seamed to have worked.
Being so focused I didn’t notice the sea water was lapping around my shoes! To my horror all my painting gear was bobbing in the water!! I grabbed my brush holder and all my brushes fell into the water and were floating, thankfully I could grab them all but a little stressful when it was such a previously calm scene!