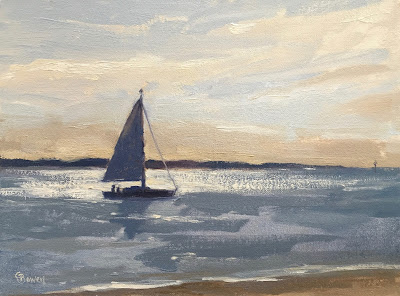 This weekend I was planning on going to ‘Brush with the Broads’ its a plein air painting festival on the Norfolk Broads. I had to cancel as my dog is very poorly again with an eye ulcer and has gone blind ( I really hope it’s temporary) with administering eye drops every hour I can’t get out to paint so I am making the most of studio work instead.
I found a photo I took as an aid memoir to go back and do a plein air, the sailing boat is coming out of Hayling Island Sailing club going out into the Solent. I like the light and tonal harmony. I haven’t used photos up to now but decided it would work as a simple subject which I can experiment. In contrast with being outside and painting, its more just getting it down in a short time. In the studio I can think more and play.
I started in a similar fashion dark and thin paint but adding a glaze medium I’d not used before called Gamblin Gel it’s supposed to dry the paint more quickly but keep the translucency and thickness. It did give it a nice sheen and flowed well across the board. Doing a first layer it’s easier for it to be a bit drier when applying the second layer and the glaze helped.

The second layer I made thicker than I’d usually go and showing more of the brush strokes. I made the mistake of doing the sea too dark in tone to start with and I did several layers on top, it didn’t work so I scrubbed it off and did this layer quickly and confidently I wanted to keep the same feel as outdoor painting being not too laboured.
I started another painting of the same subject, doing it differently I will tackle it tomorrow.