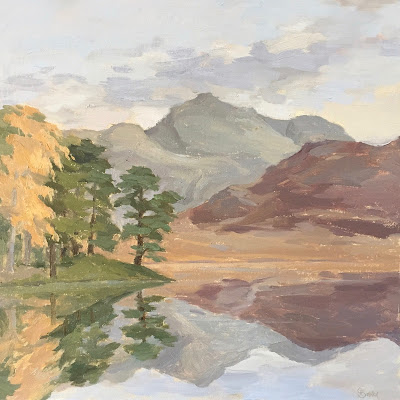 When we arrived at this small lake it was still and so perfect looking it seamed almost to good to paint! I hesitated for a bit unsure as to whether I could do it justice. But then what the heck….and had a go.
I wanted to try a bigger square format my previous size had been 8×8″ so quite a jump but it was fun having a change and the subject lent it self to it.
The scene didn’t have direct sunlight as the mountains behind me were obscuring the sunrise until later, but this soft light worked well.
I got the far mountain in first as it was changing so quickly and seamed the backbone of the painting. The red hill is usually green but with the bracken changing colours its a very rich red going into mustard yellow, fab to paint! And that iconic tree on the waters edge. The last time we were in The Lakes I drew it as I wasn’t painting outside then so it’s great to have done it now 🙂
The reflections were hard because if you don’t paint them at the same time as the top half you have to remix and paint it for the second time below! Also getting the direction right to make sure its a mirror image – not easy! I used thinner paint and scrubby brush strokes plus slightly paler in tone to describe the reflections.