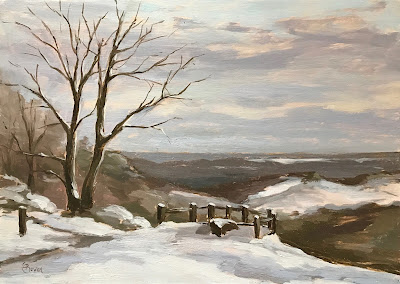 So excited to see the first snow of the season! I was out early by 8am to catch the sunrise colours, which were too fleeting to paint but photographed for another time.

The Devils Punch Bowl is a National Trust area. I have painted it several times before but first time in snow and it was stunning! It took me a while to settle on this subject, there’s a lot of space, and trees and distance and quite difficult to find a strong composition, but was pleased with this one.
I started on the darks, so it would show up the whites later and went between greeny browns to reddy browns with Raw Umber as the base.
The sun was in and out of the clouds and quickly painted the bits of light when it came.

After a couple of hours the weather turned and a front came in with more snow, the distant hills were obscured and the scene looked so different, I finished it in the studio today.

It was fun being out there despite the bitter weather! People said to me I’m either crazy or committed to painting both I think!
It’s my first painting of snow outside, absolutely loved it and want to do more!! 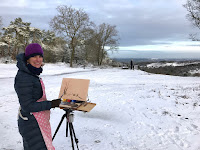