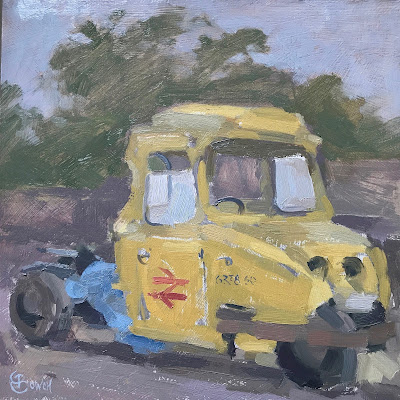 This cute little vehicle was in Ian Cryers collection in Somerset. He loves old stuff especially around the railways. He tell me this is quite a rare ‘Scammell Townsman’ and he has two them! They were used instead of horses for hawlage on the railways lines.
I thought it had great character and that’s what I tired to capture.

Ian lives next to the M5 motoway which he loves because he can store all his old machines under the motorway. The light was strange under there hard to see where it was coming from and a lot of midtones.
To take the uncertainties out of painting this unsual vehicle I painted it as though it was as a boat! (which I’m more comfortble with) and broke it down into shapes of tones and colour- manily yellows! Using a violet (Ultramrine & Perminant Rose) to darken and dirty the yellow for the shadows.
It was my 3rd painting of the day and the light was fading so this is where I got up to … 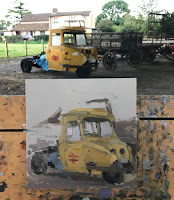 I finished it in the studio this week, tricky to decide how to paint the background.
Its almost like a still life I tried just a plain thinly painted same colour all over. It didn’t work, I wiped it off. So I took elements of what was really there and simplified them, so the emphasis is on the Mecanial Horse and hopefully doesn’t compete with the background. It was a fun subject to paint.