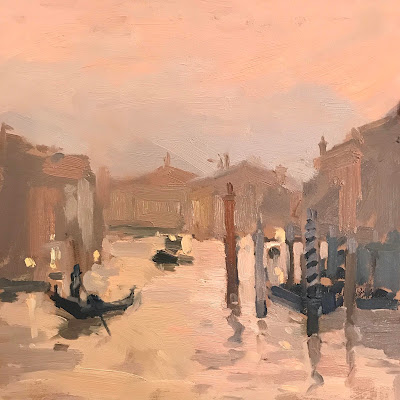 I stood in the Vaperetto water bus stop to paint this. It was a great view looking down the grand canal and the georgous light after the sun had set.
It was very fleeting so I worked quickly and keeping it loose. I mixed the peachy pink colours with Naples yellow deep, Cadmium Red & Yellow & a smidge of Perminant Rose. The red post I put in first, there were actually two posts next to each other, I had painted both but realised the composition wasn’t balanced so took one out. It’s best to put in the structure of the poles first as its harder to paint over the top especialy on a light colour making it dark enough. It was also getting the red the right tonal value and brightness – it wasnt lit so quite dark. I put a couple of lights in as they were turning on at the end of painting.
Quite a challneging spot to paint as every 10 minutes the Vaperetto bus bashed into the floating platform I was standing on and sent me flying! A couple of times I had the brush on the board and did a big accidental swoosh!
See next post with a picture on location.