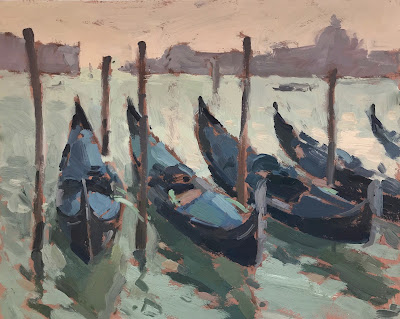 I painted with Sally Balick another artist, who helped firstly because it was such a busy spot and to be with another person helps, also to get ideas on how others tackle a tough subject.
You don’t realise how much the boats move until you try and paint them. Up and down and side to side they bob. I realised I needed to fix a position they move into then Wait until there in that positon again and do another mark.
I used mainly 8×10″ boards on this trip but it would have helped have a squarer format, Sally used a 10×12″ which fitted the scene better. See below pic, also shows how busy it was around us! 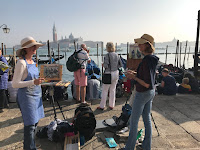 I kept it loose and brushy to give the feeling of movement so it wasn’t tight and polished. Leaving some of the ground orange colour also gives this feeling.
There was a high contrast of tonal values between the ends of the boats and sea. Thankfully none of the gondolas were taken away while we were painting them that’s always there in the back of your mind they could go at any point!

This is a much photographed and painted scene but it’s my take on it and it was fun and a challenge to do, so why not! 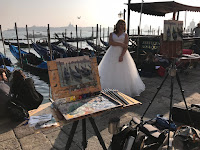 Only in Venice! a bride was being photograpahed so close to us, it was a worry with our wet oil paint and her white dress!