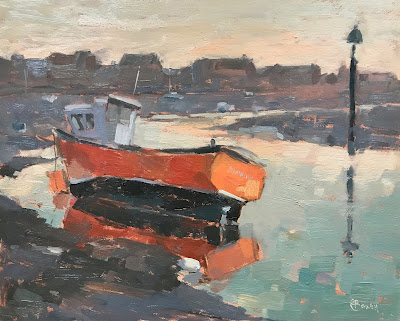 This scene didn’t look that inspiring when I started the painting but knew it would get better as the sun rose. I liked the jaunty angle of the boat and part reflection obscured by the mud. 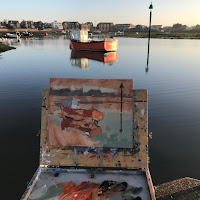 It wasn’t long before the tide rolled in and the boat was upright and floating. I made sure I didn’t start painting it like this as its whole different painting on top of it! (see above pic)
There are three main colours two of them being complementary Red-Orange & Green-Blue, they do seam to go together well and the other a warm and cool grey.

Two areas I found difficult in the painting were the strip of houses on the horizon and the cabin of the boat. The houses I repainted until I finally cracked it, painting a block of similar tone and then over painting and picking out some roof shapes, it didn’t need much. The Boat cabin was getting the drawing right and the tonal values within it. The mud line also got to fussy and overworked so wiped it off and had another go. (See pic below for the 3 areas.)
I sometimes re paint san area as many times as it takes, it often adds to the painting to have ghost of marks underneath, so I don’t think of it as a negative thing – although it can be frustrating sometimes! 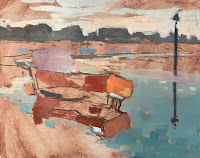