I had started this on Beer beach a couple of weeks ago, but it was the end of the day and I was pooped after painting since dawn, so I decided to leave it finish to the studio. I’m glad I did because it was a challenge!

The boats were the easiest bits and fun to paint. The sea and sky … Because it was dusk there wasn’t much light shining on the boats so they were silhouetted against the sea and getting the tonal value right was hard. And the sky being a small strip needed to get the colour intensity and tone right – 4 attempts later!
I painted the boats with a short flat brush – Rosemary & Co ‘Ultimate’ range and then painted the sea in a bigger size of this brush it didn’t look right too uniformed in the strokes, scarped it off and re did it with a large round brush. Better!
The foreground stones of the beach also tricky as I don’t want to make it too blocky and strong as its not the feature of the painting, but it was dark because of the time of day.

A good learning painting which is harder to do when painting outdoors as the time is limited and you are just focusing to get the painting down.

Been preparing 40 board (see pic below) for a trip to Dorset – I wont be using all 40 boards! Having a week in a caravan in November & hoping it’s not a mistake! But looking forward to painting the Dorset coast. 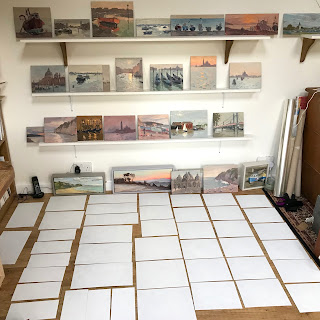