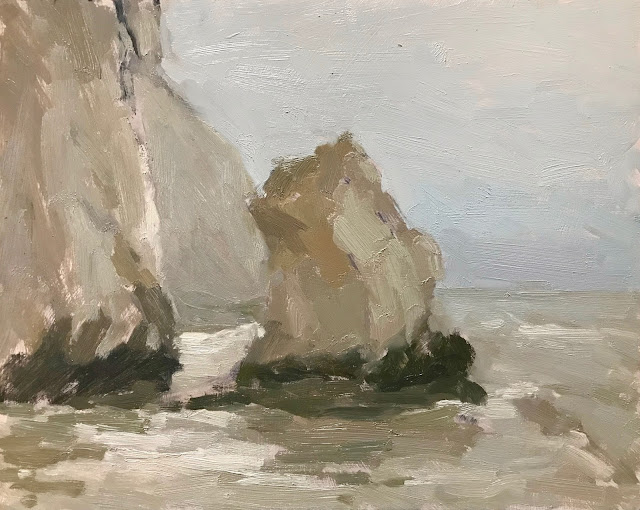 We had four days in East Sussex, a wonderful coastline with chalk cliffs and rocky outcrops. Having not painted white cliffs before they are a challenge! It’s all about the tonal values, everything was tonally close together the sea sky and cliffs, not easy! Very paintable though I could keep painting this subject for a while.

I felt I needed to do a study honing in on the rocks to really observe them and not try and make a ‘pretty painting’ but just paint what’s there!

Squinting my eyes I could see the sticky out rock was darker than the sky, so I put it in first then the sky around it, doing that I could judge the rock was too dark, so I adjusted it’s tonal value.
Because there was a lot of grey neutral colours I compared them to each other asking the question is this warmer or cooler e.g. The sky was cool and the rocks warmer.

When I was painting this Monet came to my mind as I could imagine him liking this scene.

Meanwhile the tide was coming in and the seas were getting bigger! I kept thinking I was going to get dumped on, each break of wave crashing – see pic: 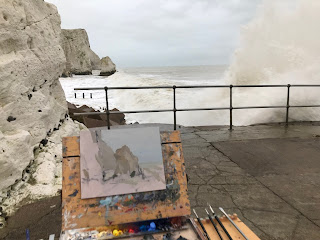 A lady warned me and said if I stay in this spot I would get cut off by the tide. So that put a bit of injection into my painting to finish! I left my spot and about 10 waves later the whole area was engulfed in water, a close escape!