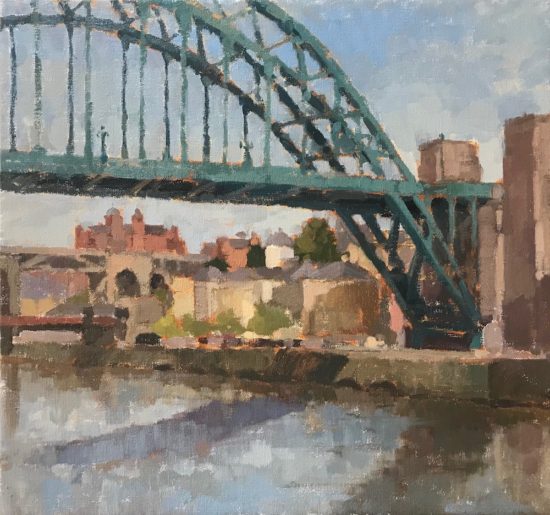 I have waited for three years to do the Sky Landscape Artist the Year as I didn’t feel ready before. For those who who haven’t seen it, it’s a TV art competition with 8 artists in each of the 6 heats. The idea is to complete a painting in 4 hours – more like 3 with the interviews. I was selected from around 1500 online applicants.

My episode was filmed in Newcastle Upon Tyne on July 4th 2019. I decided to go up a few days early so I could get my bearings and do some sketching.  I had hoped it was the Tyne bridge as it was the most paintable view in the area.

A tonal sketch made the day before the competition.

I felt very nervous for the day. Painting en plein air you never know if it will turn out ok and with the extra unknown factor of ‘performing’ for the cameras, it was keeping me awake at night!

In preparation I watched all the LAOTY episodes, which helped to familiarise with the format, process and judges. I also read through the Making a Mark blogs by Katherine Tyrrell and her comprehensive reviews on the previous series. I found the tips so helpful in preparing for my day. I also read other artist’s blogs from previous years. Greg Mason & Jen Gash blogs were honest & insightful about each episode they were in.

On the 4th July 2019 we started at 6am, meeting the 7 other artists (6 men & 1 other woman) and production team to get miked up and eat some breaky. It helped to meet the crew, who were very friendly and smiley although with my nervous energy I felt I could ping off the walls!

Video taken at 6am before we left for the filming location.

The filming was situated in HMS Calliope, with a view of the Tyne Bridge. It is similar to the Sydney bridge which was designed by the same architect and built in 1925.

We were allocated our pods and standing there the realisation of what I had to paint hit me, being quite close to the bridge and it loomed above us high over the river.  I looked for other options but there was little fodder as the compositions were too weak. The bridge was a good subject but I would have preferred it contra jour and with us standing further away from it.

The camera crew filmed me setting up all my gear, by which time I was physically shaking in anticipation!

9.15am About to start video

9.30am Starting The Paint

Right from the get go we had interviews from the producers, judges and presenters. It was exciting being on camera but also tricky to get the brain into gear when you’re nervous and trying to focus on the painting! 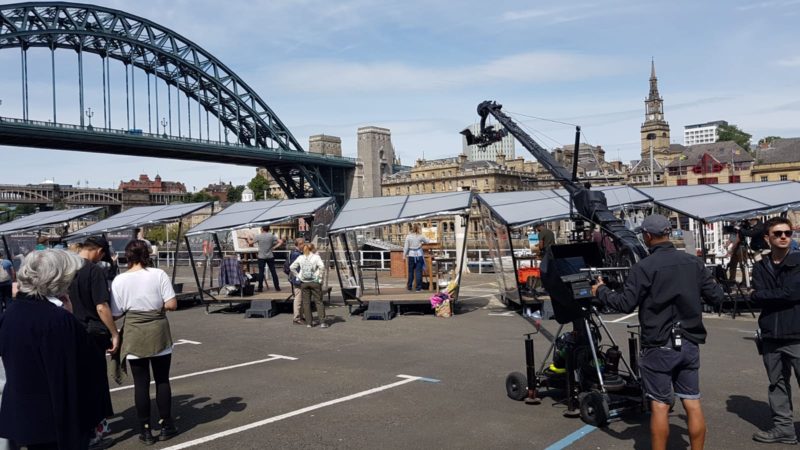 I sketched out the view under the bridge on a panoramic canvas but it didn’t seem meaty enough. I realised I liked how the bridge framed the scene beneath it so I abandoned the panoramic and started again, including the bridge and scene beyond.

I had an early interview with presenter Stephen Mangan; he was a lovely chap and made me laugh and relax a little.

Although I am used to plein air painting, the detail and complexity of the subject was out of my comfort zone and I realised I might struggle to finish on such a big canvas. It was too late to start again, so I had to keep going and work quickly!

In a ‘normal’ plein air painting I try to complete within 2-3 hours because the subject changes. The Sky Arts paint was over a longer period which adds challenges!  The tide had gone out so the water was no longer visible and the light had flattened and changed position. Also heavy texture on the canvas was not working in my favour as it required a lot of paint and time.

Although it was a tough subject I liked what I was painting, it reminded me of an old French town. I wanted my painting to have a feeling of light and colour and to give an impression of the day.

When both Kathleen Soriano & Joan Bakewell interviewed me near the end of the time I felt a bit stressed as I was trying to finish the painting. Despite that we had a good a chat.

At 1.30pm Joan told us all to stop painting and it was a relief to put down my paint brush!  I’m pleased with the final result and think it captures the essence of the day and place.

The eight painting line up was an assortment from watercolour, collage and oils. We all stood next to our paintings waiting for the results. I am a competitive person 🙂 and so passionate about painting that, despite the angst, I enjoyed the day very much and I really wanted to go through to the semi finals. I had so much nervous energy it looks like I have ants in my pants! 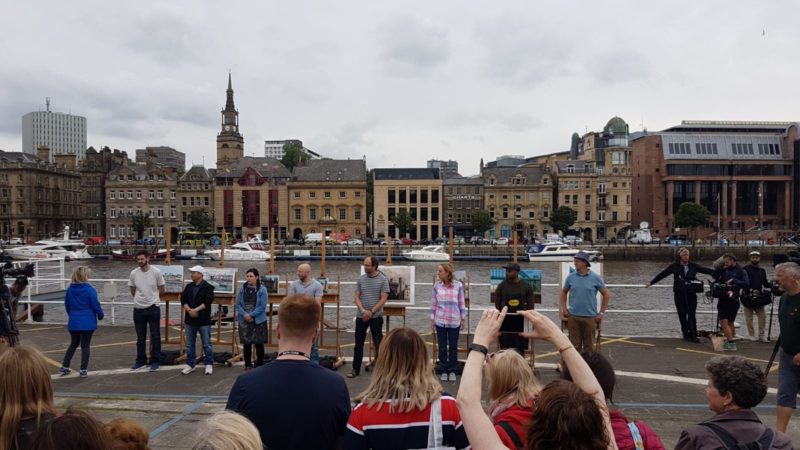 End of the paint  – 8 artists & our paintings

The presenters called out the three shortlisted names and I was so pleased to be one of the them I may have jumped up and down!! Our three shortlisted paintings were then put together along with our submission paintings and the judges decide who will go through to the next round. 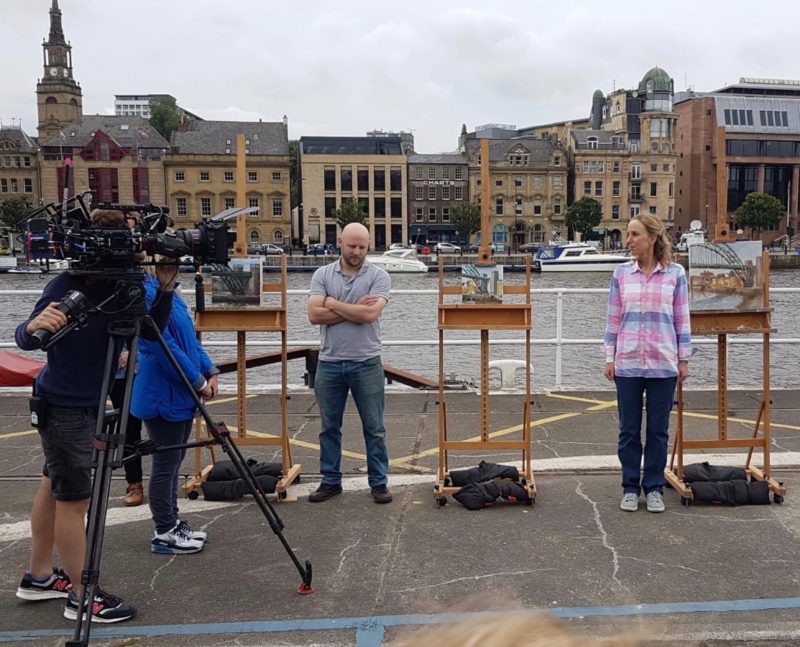 Shortlisted three from the left to right: Joanne McAndrew, David Youds & me

Waiting for the results I had a feeling that I wouldn’t get through. David Youds was called out as the heat winner and his wife and children bounded over. It was disappointing but the judges were really kind and said it was hard to choose between us which helped.

The Storyvault Sky Arts crew were so kind and I felt really looked after on the day, I was sad it ended! It was also nice meeting the other artists and keeping in touch with them too.