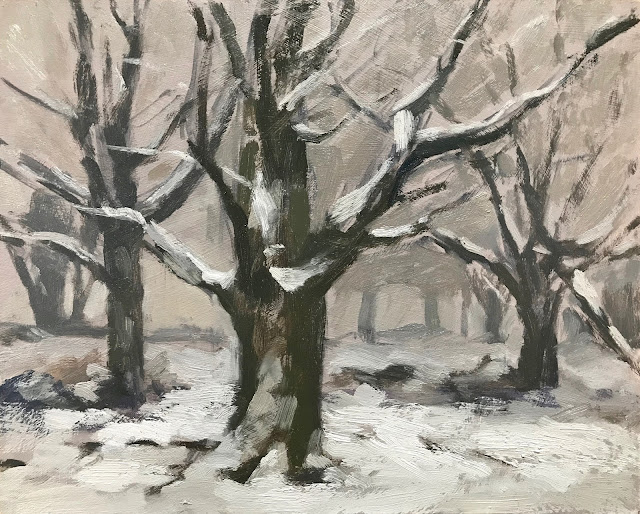 I didn’t know we were due snow, so Sunday morning was quite exciting! I dropped everything to get out and paint at the highest point in our area – The Punch Bowl.
I was drawn to these trees because of the shapes and the snow on them and the feeling of receding space helped by the mist.
It was snowing when I arrived but later turned to rain. I couldn’t have painted without my new brolly its called a Gust Buster for golfers, its huge 62″ white monster, supposedly good for wind too. I rested it on my palette as too heavy to hold but it worked a treat my palette and board didn’t get wet, yay! 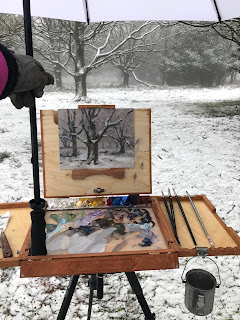 This is mainly a tonal painting starting with the big foreground tree which had some green in it I then adjusted the tone by adding a light violet for the middle distant trees and the far trees had Naples Yellow in too. I put the structure of the trees in first then the lighter tones of snow.
Because I was painting quick – it was cold! and I wanted the trees loose, I didn’t shape the foreground tree enough and then it was too late, best to leave it and not fiddle, so its fatter than the original, but doesn’t really matter, still gives a feel for it!
The really light snow I paint on thickly helps to see the texture of the paint.