The trial and tribulations of plein air…I stopped 5 times to find a suitable place and subject to paint, I but came home with no painting!

(I actually went back the next day and did the above painting.)

To give you an idea of what sometimes happens when I am searching for a subject….

First stop off the A3 going south near Clanford, I’d seen the area before and wanted to look with sunlight. But not inspiring enough to paint. so I continued to the coast, I usually start looking from the closest place to begin with which is Langstone Harbour, looking for the right combination of tide, light and boats. This time the tide was too high so there wasn’t enough compositional elements.

I moved onto Emsworth Harbour, the best bit there was on the mud contra jour but it wasn’t what I fancied so moved on again, to Bosham Creek. This was just right, the tide level, the gorgeous sky. But I didn’t have the board that would suit the subject – it needed to be a long panoramic shape, I tried to make do with a traditional landscape shape board but it didn’t work.

So moved on again to Bosham Harbour. The tide was just right as I arrived which didn’t leave me time to set up and paint it. I tried but the wind was very gusty and knocked my easel over while I had my back turned all my paint from my palette garage fell onto the road, I tried to scrap it up and re use it but there was too many bits in it! 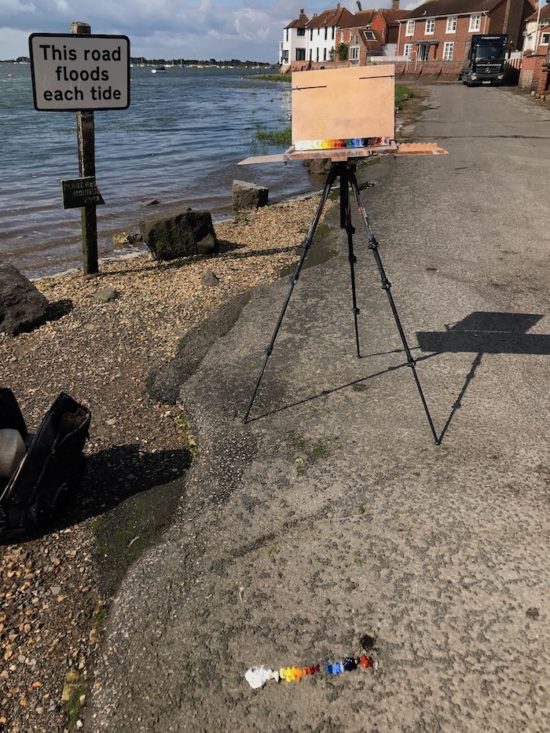 Spot the paint on the ground!!

By then the water was at my feet and the the composition had disappeared. I remembered it enough to draw so it would remind me to return and try a paint again…

Driving home I didn’t feel too dejected with no painting to show for my efforts as there were two subjects found and I would return the next day to try again!

I arrived earlier at the Bosham Creek and there was no water as the tide was so far out, the water looked miles away. But I decided to set up all my equipment, it was a bit of a mission as I had two pochards with me – I was going big!!

80x40cm en plein air is not to be sniffed for me, one of my biggest to date I think. My usual pochade was way too small to hold it. So I used a half french pochade and my open box m resting on the draw of the French Easel. 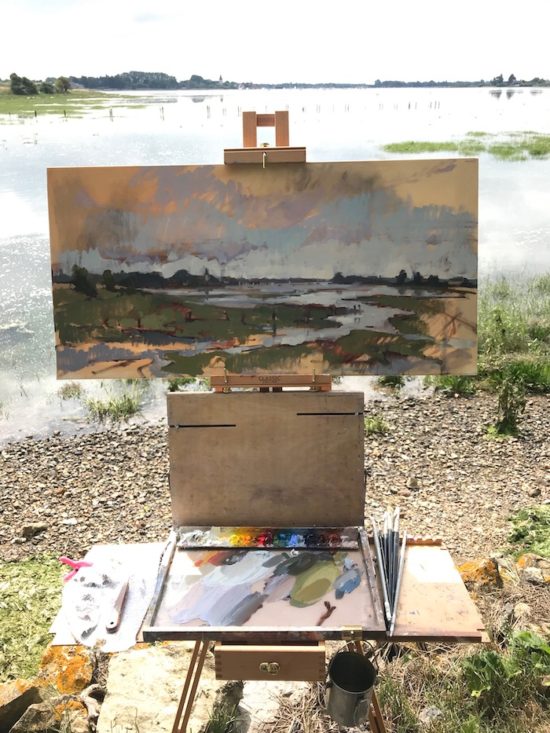 I spent time on the composition, being a big painting I wanted it to be dynamic and strong. I liked the S shape of the water and emphasised that it was changing incredibly quickly within 15 mins it was starting to flood the area and you couldn’t see the S shape anymore! I didn’t even pause to mix paint before I started and put the water and land in so I had a starting point.

Near the end of the painting I saw some little sail boats came out and they worked perfectly against the dark of the boat house in the distance.

The sky wasn’t as good as the day before so I changed it back in the studio to big clouds and lovely light.